This unforgettable Africa safaris packages will take you to the Lake Manyara National Park, one of the Tanzania’s most dramatically located wildlife areas, consisting of a shallow but huge soda lake, located at the foot of Great Rift Valley’s western escarpment. The size of the park makes it perfect for a one day game drive and notably famous for its tree climbing lions. These travel tour will take you to Serengeti National Park, a massive wilderness of 14500 square km, where every day brings a new landscape and new adventure. Tour will also take you to the Ngorongoro Crater, which has highest concentration of game and arguably the densest population of predators and carnivores in Africa. Here you will witness an amazing spectacle of African wildlife. Finally also tour will take you to Tarangire National Park, which features some of the greatest concentration of game in Tanzania – second only to the Ngorongoro Crater – but less crowded and unspoiled – possessing a wild and unkempt beauty. 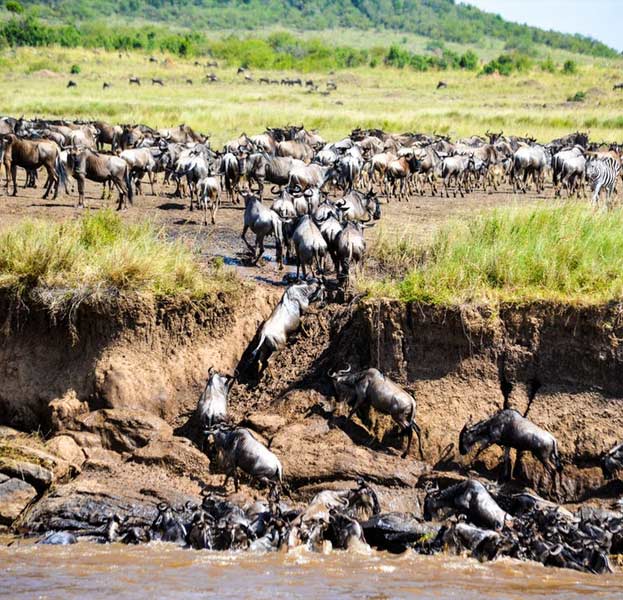 Pick up from Moshi and transfer to Lake Manyara National Park. We arrive in lunch time at lodge/campsite and after lunch done we head into the Lake Manyara National Park for an afternoon game drive. This National Park is one of Tanzania’s most dramatically located wildlife areas consisting of a massive but shallow soda lake(covering two-thirds of the park), located at the foot of Great Rift Valley’s western escarpment. The park varied habitat attracts variety of animals, including one of Africa’s largest concentrations of an elephants, Lake Manyara’s unique tree climbing lions, as well as large flocks of flamingos attracted by the algae in the lake.

Be one of only a few fortunate people to glide in a hot air balloon over the Serengeti plains (available at supplementary cost by pre-arrangement). Floating silently above the awakening bush, while spotting wildlife and enjoying the amazing scenery of Africa, across rivers and numerous villages.

We do after breakfast game viewing drive along the Sogore river circuit, which loops into the plain south of the Seronera River and which is good for possible lion, Thomson gazelle, topi, ostrich, Cheetah sightings. The Visitor center close to Serengeti Seronera Lodge and public campsite is well worth a visit after the morning game drive. This place offers some interesting wildlife displays as well as a gift shop selling informational leaflets and map of the area. The center also has a shop where could purchase    drinks and snacks. In the afternoon we will follow the Kopjes Circuit, which goes ant-clockwise around the Maasai Kopjes, which usually attract a numbers of lions and some formidably large cobras. Kopjes are weathered granite outcrops, scattered around the plains, most of which are miniature ecosystems, providing shade and drinking water in pools left in the rock after the rains. This makes the Kopjes particularly good for spotting wildlife in the dry season, including lions, which like to lie in waiting for animals coming to drink.

After breakfast we depart to Ngorongoro Conservation Area. We will stopover Olduvai Gorge, boasting Leakey discovered the skulls of `Nutcracker Man’ and `Handy Man’, both very significant links in the chain of the human evolution.

We arrive in lunch time at the lodge and after lunch we will descend to crater to view wildlife for half day tour. We will visit Lake Magadi, a large but shallow alkaline lake in the southwest corner, which is one of the main features of the crater. A large number of flamingos, hippos and other water birds can usually been seen here.

After breakfast we depart to Tarangire National Park. The park runs along the line of the Tarangire’s river and is mainly made up of low-lying hills on the Great Rift Valley floor. Its natural vegetation mainly consists of acacia woodland and giant African baobab trees, with huge swamps areas in the south. Both the river and the swamp acts like magnet for wild animals, in dry season. The Tarangire National Park is reputed to contain some of the largest elephant herds in Africa. This park is also home to three rare species of animals – the great Kudu, the Fringed-eared Oryx as well as a few Ashy Starlings. After picnic lunch we do an afternoon game drive.

We enjoy an early morning game drive in the Tarangire National Park, followed the breakfast. We will then transfer back to Moshi or alternatively to the airport. We will have late lunch in Moshi or airport. You will be taken to your hotel or airport, which end our safari services.

The status of Tanzania safari parks as a primary destination for wildlife explorers has been reflected in the expeditions of The National Geographic, The Discovery and The Animal Planet. Indeed, Northern Tanzanian parks are fantastic – Serengeti offers unique lion safaris and The Great Migration, Tarangire is famous for its fascinating elephant safaris, and Ngorongoro enjoys the reputation of a place with the highest density of wild animals. Lake Manyara with its flocks of pink flamingos and Mahali and Gombe parks with the largest population of chimpanzees are also must-have pieces to the collection of any avid traveller. Undoubtedly Tanzania is the best place for completing your full African wildlife safaris list.

Tanzania Tourism Safaris is always ready to turn your African dreams into reality. The fusion of technology and traditions of Tanzanian hospitality enables us to suit the fancies of everyone interested in Tanzania.

The best time for safaris in Tanzania depends on what your travel preferences are.

The period from June to October (also known as the “dry” season) is perfect for watching the Great Migration. Furthermore, this season is also excellent for safaris since the density of animals is the highest near the rivers and other sources of water. The number of mosquitoes is much lower than the usual one, and the weather is mostly sunny. The number of tourist vehicles in the parks is reasonable, though Ngorongoro and Seronera plains in Serengeti are usually the hotspots. Make sure to take warm clothes for the early mornings in June-August, when the temperatures may be low.

The “wet” season (or the “rainy” season) from November to May is ideal for those, who are eager to watch hunting scenes. Calves are born from January to February, and the predators are notably active during this time. The migration of birds is also at its peak at this time of the year, turning the National Parks into a paradise for ornithologists.

Furthermore, the vegetation is booming during the rainy season, and the Parks are amazingly green. Many award-winning photos of the Tanzanian wildlife have shot during May-November. This time is ideal for nature photographers.

A remarkable feature of the wet season is that the number of visitors to the Parks is notably lower than during the dry one. Coupled with the fact that rains are often (though not always, especially from March to May) short dribbles in the second half of a day, the advantages of rainy season should be surely taken into consideration in planning a trip to Tanzania.

For nationals of the majority of countries, 90-day single-entry tourist visa to Tanzania is issued upon entry to Tanzania at the airport for USD 50. Citizens of the USA, however, are given multi-entry visas for USD 100. Nationals of the following countries need to get a referred tourism visa in the nearest embassy of Tanzania ( you could find the list of such countries here). If you need a referred visa, make sure to apply to the Embassy in at least 45 days before your visit.

Once you finish the border formalities, you will find our transfer driver waiting for you in the “arrivals” zone of the airport with a signboard with your name, who will take you to one of the best hotels in Arusha or Kilimanjaro. Tanzania Tourism Safaris entrusts your accommodation to the proven hospitality providers only.

One of the tenets of our philosophy is to make Tanzanian adventures available and affordable for everyone. However, we firmly believe that Tanzanian hospitality is an essential part of the trip, as well as that comfort, is vital to maximize your wildlife experiences. We do not have budget camping and low-profile lodges in our pre-arranged itineraries and do not include them into our custom programs. However, our tours feature luxury and premium lodges at reasonable prices. Our company has exclusive agreements with many award-winning hotels & lodges in the National parks, allowing us to offer the most attractive prices.

Your Tanzania safari cost with Tanzania Tourism Safaris will include almost everything except the tickets to Tanzania. Drop us a line to know more about this.

Contrary to the popular misconception Tanzania is one of the safest country in Africa. Listed among the safest countries on the continent, Tanzania has always been a hotspot for the nature enthusiasts. This country is one of the few in Africa, whose people have never seen a civil war or other large-scale unrest. The strongest government in the East African region prioritize the development of tourism, and many measures are in force to make sure that the tourists are safeguarded from all risks and hazards.

At the same time reasonable measures of protection are advisable – do not leave your personal belongings unattended, as well as do not demonstrate unnecessarily your wealth to the locals to avoid provocations.

Unless you are entering Tanzania from the epidemiologically dangerous regions, no vaccinations are necessary, though some are advisable.

Etiquette and Tips in Tanzania

Though Tanzania is a melting pot of Bantu, European, Arabic, Indian and other cultures, the daily etiquette of the country is quite simple – the Tanzanians have taken the best and the simplest.

Greetings are important in Tanzania. They usually take longer, because the rhythm of life in this tropical country is slower than in the developed countries. So do not be surprised if a Tanzanian is shaking your hand a bit longer than you expected.

Make sure asking permission when you want to take a picture of a local. Respect the elders, be polite and you will never have any cultural problem in Tanzania. Remember that Zanzibar the Muslim population of Zanzibar is very significant. The people there frown upon open clothes, so our guests are advised not to take

Tanzanians are amiable people, for whom hospitality is not an empty word. The locals are very proud of their country and always do their best to make sure that the tourists leave the country with pleasant impressions only.